What is Great Decisions?

How can I start a discussion group?

Anyone can start a Great Decisions discussion group in their community.  The FPA has produced program guides that explain in detail how to start a group in four popular venues.

Great Decisions in the Library

Great Decisions in the Retirement Community

Great Decisions in the Classroom

Great Decisions in a Faith-Based Organization

How can I join an existing group?

Great Decisions discussion groups exist in communities all across America.  You can use the FPA's "Find a Group Near You" to enter your state and find a group near you.

What are the materials I need and when are they available?

The Great Decisions discussion program is supported by a number of materials and resources produced by the Foreign Policy Association annually.  The following are available in January every year, with pre-order discounts offered as early as October for the upcoming year.

Which topics are covered in Great Decisions?

Each year, eight topics are chosen by a panel of experts.

The 2017 Great Decisions topics are:

Does Great Decisions have an impact on U.S. foreign policy?

Yes.  Each year, Great Decisoins discussion program participants are polled about their views on the eight topics discussed.  The results are compiled in the National Opinion Ballot Report and distributed to the White House, members of Congress, the departments of State and Defense, the national media and participants in the Great Decisions Discussion Program. The Report is a valuable way of sharing the informed opinions of citizens with the people who shape U.S. foreign policy.

What is the history of Great Decisions?

The first "Great Decisions" group was launched in Portland, Oregon in 1954 by FPA's Vice President Roger Mastrude.  Based on the so-called "Avon" model of face-to-face, active and informal conversation, participants would read a fact sheet on each of the eight topics before meetings, where they aired their respective views and opinions.  FPA would tally up opinion ballots and report the results to the Department of State.  The program gained media attention, was picked up by local schools, and soon gained national attention.

Where can I watch the television series?

The Great Decisions Television Series is temporarily off the air due to staffing shortages.

When is the deadline for submitting National Opinion Ballots?

Opinion ballots for each topic can be found in the Great Decisions online here. The opinion ballots should be filled out by participants after they have read and discussed the topics presented in Great Decisions.
The ballots are sent to FPA, where they are tabulated, analyzed and published in the National Opinion Ballot report.
The National Opinion Ballot Report is presented to the White House, members of Congress, the departments of State and Defense, the national media and participants in the Great Decisions Discussion Program. The Report is a valuable way of sharing the informed opinions of citizens with the people who shape U.S. foreign policy.
Opinion ballots must be submitted by July 1st (mail) or Sept 1st (online) in order to be tabulated for the National Opinion Ballot Report.

What is the Frank R. Cella Memorial Award?

All Great Decisions groups are eligible for nomination, including groups serving a particular locality, community, or professional association; groups based in a workplace, a school, a library, or a retirement community; recently established or long-established groups—that is, any group participating in the Great Decisions network.

Group members may nominate their own group, or an individual outside the group may submit the nomination.  Please send nominations by December 31, 2013 to [email protected] 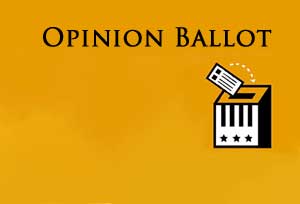 The program provides background information and policy options for the eight most critical issues facing America each year and serves as the focal text for discussion groups across the country.