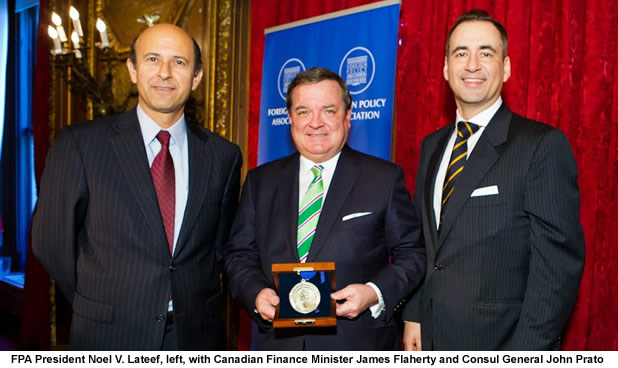 The Foreign Policy Association’s mission today—as it has been throughout its 100-year history—is to contribute to a more vibrant democracy through citizen participation in the foreign policy process. A private, nonprofit, nonpartisan educational organization, FPA serves as a catalyst for developing awareness, understanding of and informed opinion on U.S. foreign policy and global issues. It is the nation’s oldest organization devoted to citizen education in international affairs.

Harking back to its very beginnings, FPA is inclusive and seeks to engage the public as a whole. “In a democracy,” President Franklin D. Roosevelt wrote to Major General Frank R. McCoy, then FPA president, “the Government functions with the consent of the whole people. The latter must be guided by the facts. The Foreign Policy Association is performing a high duty in facilitating the lucid presentation of the facts of world problems and their impact upon the United States.”

FPA provides a forum that illuminates the hard choices facing the United States in an increasingly interdependent and multi-polar world. Indeed, FPA continues to be the principal public forum in New York City for foreign policy addresses, attracting broad national and international attention. Over the years, U.S. presidents from FDR to Ronald Reagan and Bill Clinton, have delivered major addresses before FPA audiences. Likewise, in recent years, world leaders from every continent have graced FPA’s forum, including the prime ministers of Australia, Greece, Japan, India, Ireland, Italy, South Africa, Spain, Sweden, and Turkey, and the presidents of Chile, Indonesia, Mexico, Mongolia and Senegal, among others.

The diversity of FPA audiences provides an excellent forum for world leaders to communicate directly with a broad cross-section of the American public. All of FPA’s events attract informed individuals from the financial, business, and academic communities, as well as from the media.

Among its signal accomplishments, FPA founded a dynamic network of close to one hundred World Affairs Councils across the United States. FPA disseminates its New York-based programming, as well as other multimedia content, throughout this network.

By enriching the foreign policy debate through its balanced publications and programs, FPA occupies a unique space in civil society. For nearly a century, FPA has championed the use of the most powerful communications tools of the day to reach out to the public.

Today, www.fpa.org receives a record number of hits as one of the most visited international affairs websites. Despite the rapid growth of the Internet, an effective way to reach the public is through television. Nearly three quarters of Americans receive their information about the world from television. FPA produces and distributes the longest running international affairs television show on the PBS network.

FPA is committed to bringing along future generations of leaders in the public and private sectors, who are well-versed in world affairs. Three distinct initiatives have been launched in pursuit of this goal:

FPA’s World Leadership Forum provides a unique parley in which to exchange views about global challenges and to identify creative responses to those challenges. Over 60 heads of government have participated in the Forum. A testimonial from the Head of the Department of Social Sciences at the United States Military Academy at West Point described the Forum as the best academic trip the 30 cadets had experienced during their time at the Academy.

The John C. Whitehead Fellows Program gives 80 young leaders access to all of FPA Fellows’ and Board programming.

These initiatives form one of the nation’s premier post-graduate programs in international affairs.

FPA’s service to the nation is performed with no government support. FPA operates strictly on the basis of private funding. Individuals, corporations and foundations have enabled FPA to fulfill its critical mission.

FPA’s role as a source of objective information on world affairs has never been more important. In an increasingly interconnected world, public access to in-depth, contextual information about global issues is vital. By offering Great Decisions, the leading U.S. grass-roots outreach program on world affairs, FPA contributes to expanding citizen engagement in the foreign policy process, as well as to a sustainable foreign policy.

From “basic materials in plain language for weekly study and discussion sessions,” Great Decisions has flourished into a multi-dimensional global studies program adapted to multiple formats, including informal discussion groups, public lectures and formal secondary school and university courses. The secret to the longevity of this program? In a word, excellence.