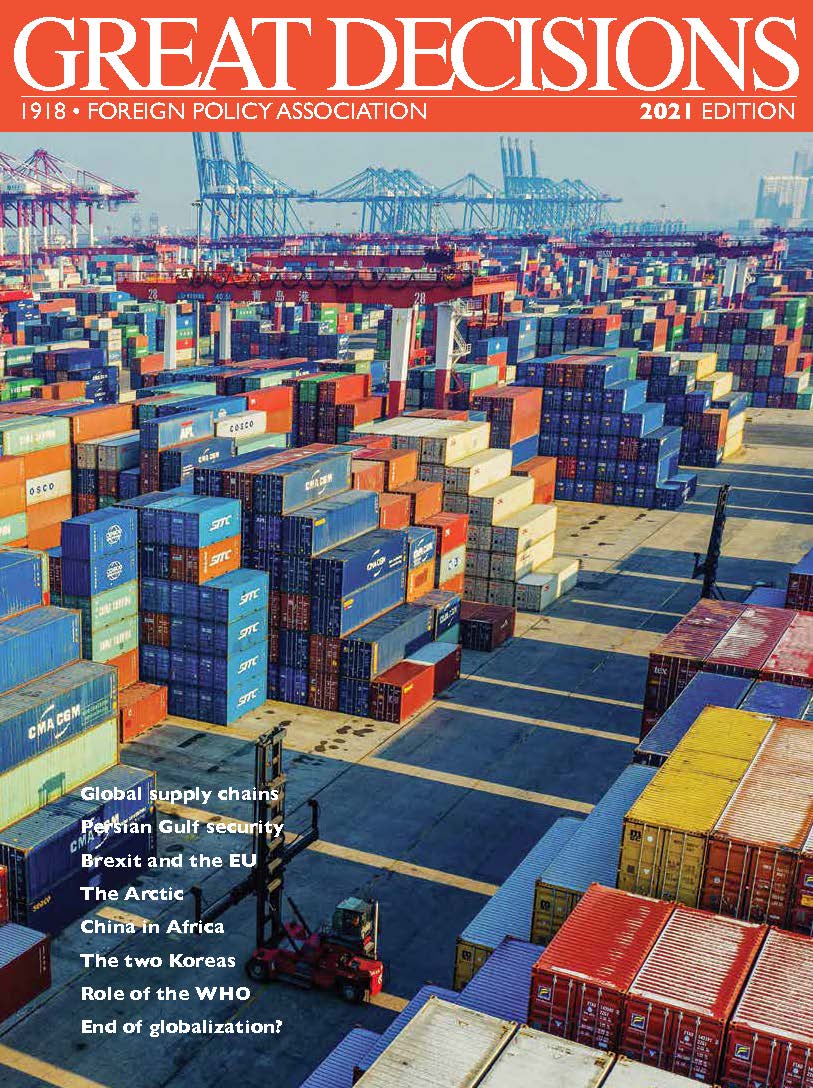 We’re pleased to announce the topics for Great Decisions 2021. The eight topics are:

The shutdown of global supply chains due to the Covid-19 pandemic brought to the fore an issue with the high level of global economic interdependence: what happens when one country is the main source for an item, say face masks, and then can no longer supply the item? Countries suddenly unable to meet the demand for certain supplies are faced with growing calls for economic nationalism. What are some of the lasting effects that the pandemic could have on global supply chains and trade? How would this affect national security?

The Persian Gulf remains tense as the rivalry between the regional powers of Saudi Arabia and Iran continues. Tensions escalated in early 2020 as the United States began to intervene in the Gulf, launching an airstrike that killed two Iranian military commanders. What are the historical influences that have led to these tensions? What role, if any, should the United States play? Is using military force a viable foreign policy option for 2021 and beyond?

Brexit and the European Union: by Harris LaTeef

With the “Brexit transition period” coming to an end this year, the United Kingdom will formally leave the European Union at the start of 2021. With negotiations between the two entities continuing to stall, what does the future of Europe and the UK look like? Will the UK survive a possible Scottish vote to leave? Who will step up and take command of Europe now that Angela Merkel is out of the spotlight?

Struggles over the melting Arctic: by Stephanie Pezard

U.S. President Donald Trump left many scratching their heads when it was rumored that he was looking to purchase the large island nation of Greenland from Denmark. While any potential deal seems highly unlikely, the event shows the changing opinion within the U.S. government toward engagement with the Arctic region. Because of climate change, large sheets of arctic ice are melting, exposing vast stores of natural gas and oil. With Russia and China already miles ahead with their Arctic strategies, can the U.S. catch up?

The Covid-19 crisis has put a massive strain on what was growing a positive economic and political relationship between China and the continent of Africa. As Chinese President Xi Jinping’s centerpiece “Belt and Road initiative” continues to expand Chinese power, the response to the spread of Covid-19, as well as the African government’s growing debt to China, has seen pushback. What are some of the growing economic and political issues between China and Africa?

The Korean Peninsula: by Scott Snyder

The Korean Peninsula is facing a defining era. Attempts by South Korean President Moon Jae-in and U.S. President Donald Trump to repair the rift between North and South have lost any momentum as Pyongyang continues to test long-range missiles for its nuclear weapons program. As the rift between the U.S. and China grows further, South Korea may end up in the middle of the two superpowers. What does the future hold for the U.S. relationship with the ROK?

Roles of international organizations in a global pandemic: by Mara Pillinger

The Covid-19 pandemic has thrust the World Health Organization (WHO) into the limelight, for better and for worse. While some of the Trump administration’s criticism of the organization is unfair, the response to the early stages of the pandemic left many experts wanting more from the WHO. What is the WHO’s role in responding to international pandemics? What can be done to improve the WHO’s response to future global health crises?

The end of globalization?: By Anne O. Krueger

**Titles are subject to change before publication