Power to the People: The New Egypt - Screening & Panel Discussion 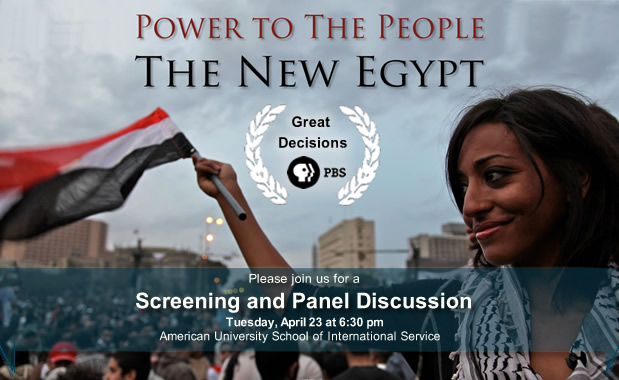 The U.S. has enjoyed 30 years of relatively stable relations with both Israel and Egypt, thanks in large part to the peace plan outlined by the historic Camp David Accords.  The harmony between the two rivals has provided a key element of stability in an otherwise turbulent Middle East.  But Egypt’s bumpy transition from the autocratic rule of President Hosni Mubarak to its post-Arab Spring reality has put many on edge.

Please join the Foreign Policy Association and the American University for the screening of "Power to the People: The New Egypt," a 30-minute documentary examining the challenges that the new Egypt poses for American policymakers and U.S. allies in the region featuring former U.S. President Jimmy Carter, Foreign Affairs Magazine's Jonathan Tepperman, The Atlantic's Thanassis Cambanis, and other key figures in the debate. The event will be followed by a Q&A session with experts in the field.